There aren’t many books you will read in your lifetime that are hard to put down, you can finish them on one or two sittings and thirdly despite being written over a hundred years ago are still timeless.

Colm Tóibín remarked on  J.M Synge’s The Aran Islands that “unlike most travel books of 100 years ago, it has not dated at all”. 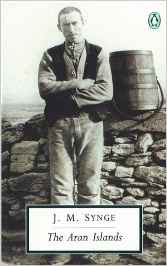 It is a fascinating insight into life on the Aran Islands at the turn of the nineteenth century. Synge himself a young man just shy of 30 was at a crossroads in his life, a writing career that was not flourishing , various experiences around Germany and Paris had left him wishing to return home. An uncle of his had spent 3 years on InishMore as a Church of Ireland minister, thereby giving the young J.m Synge an opening and introduction into life on the Aran Islands.

Over 4 years J.M spent  winter and summer seasons on the Aran Islands, favouring Inishere the smallest of the 3 islands, where he felt welcome and at home.

His reflections of the locals, their rituals, their traditions and folklore has a major impact on his outlook on life. He never once looks down on their at times primitive ways and notions, if anything he seems fascinated and impressed by them.

Most notably the weekly curragh (small man made vessells) crossings between the islands or to the mainland where men and women took their life in their hands at every moment was something to be revered and respected.

Which evolved to the knitting of the Aran Sweaters to identify these men who were drowned at sea , often washing up on another island, which at the time was like another country such was the regional differences between the Aran Islands.

Synge followed local practices such as harvesting Kelp which would be sold on the mainland as well as the transportation of cattle to the mainland for the winter months which was of such a dramatic nature it would attract large crowds of spectators. 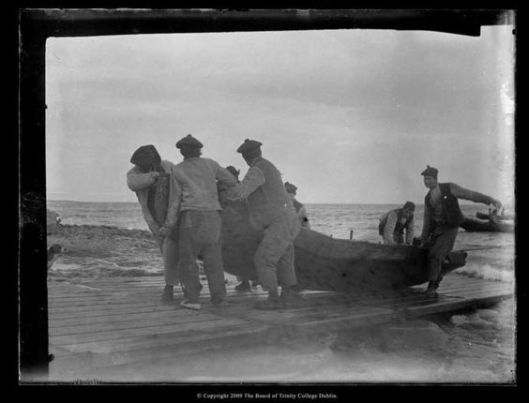 The islanders clothes were often all the same colour , a kind of sack cloth tweed brownish colour. The Aran Sweater beginning to be the choice of clothing for Fisherman at this time to keep fishermen warm and dry from the elements that would literally batter the islanders.

Synge recorded in the Aran Islands that , “In Aranmor [the largest of the Aran Islands] many of the younger men have adopted the usual fisherman’s jersey, but I have only seen one on this island.”

Showing again how things differed among the islands, thus recording the Aran Sweater at the end of the 1890’s.

It’s a timeless and wonderful read we would highly recommend.